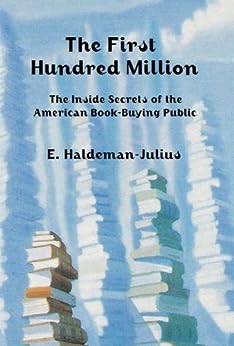 The First Hundred Million: The Inside Secrets of the American Book-Buying Public

AMERICA'S GREATEST PUBLISHER REVEALS THE SECRETS BEHIND HIS ASTONISHING SALES! Emanuel Haldeman-Julius, the man behind the groundbreaking Little Blue Books series, sold one hundred million five-cent books advertising only a list of titles. He quickly realized that the right title could increase the number of copies sold by 500% or more! Robert L. Simon of Simon & Schuster asked Haldeman-Julius to tell the public his story, and it is all here in The First Hundred Million. Now you can learn his secrets. In these pages, you'll learn: --subjects people most want to read about --title words that practically guarantee increased sales --title phrases that virtually shout, "You must read this book!" Haldeman-Julius even reveals his own advertising costs in various magazines, and the exact return on investment he received. The First Hundred Million is part business class, part autobiography, and all engrossing. Click now to gain this all-important knowledge and start selling more books today!
Got A Question