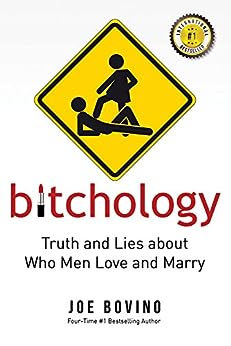 Bitchology: Truth and Lies about Who Men Love and Marry

Sherry Argov's perennial #1 bestselling book for women on dating and mate seeking, Why Men Love Bitches: From Doormat to Dreamgirl--A Woman's Guide to Holding Her Own in a Relationship, has been sending the wrong message to American women at precisely the wrong time. That book, with a lie for a title, is a wrecking ball. As a public service, she should re-title it Why Men Loathe and Leave Bitches: From Doormat to Dipshit--A Feminist's Guide to Holding Him in Contempt.

Joe Bovino's Bitchology: Truth and Lies about Who Men Love and Marry doesn't play silly word games or regurgitate groupthink. It's a tough-love relationship guide for women who think they're too nice or too bitchy to succeed with men and haven't abandoned common sense. It demonstrates that the choice between being a submissive doormat or a (white) man-hating bitch is a false one. You lose either way. Fortunately, there's another approach, and it works like a charm.

High-quality men with options in an increasingly global dating market are looking for a different kind of woman to love and marry--a confidently feminine one or "Keeper"--and Keepers are in short supply in many parts of the United States these days. That thesis should come as wonderfully encouraging news to most of you, but it's not as easy as it seems. Perfection isn't necessary, of course, but you need an abundance of confidence and femininity to really crush it out there.

Bitchology begins by examining the impact of third-wave feminism and its attendant bitchiness on America's dysfunctional dating scene. It analyzes fourteen subcultures of American women as case studies, highlights some conspicuous problems, and suggests remedial measures. And, in the final chapter, it introduces fifteen "Keeper Principles" to help you win the heart of a truly great guy.