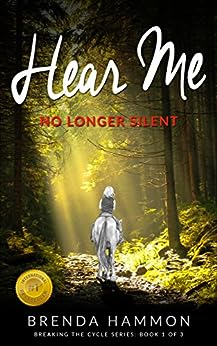 Hear Me: No Longer Silent (Breaking the Cycle Book 1)

At age five, Brenda learns fast to play, to tackle challenges with determination, and to ride the horses she loves. She also learns that she doesn’t need to be afraid of strangers. Instead harm lurks much closer.
Brenda’s life changes forever when a hired farm hand and a member of her own family sexually assault her.
These early violations ripple into more anguish—mental, emotional, and physical abuse—that continues as Brenda crawls her way through her youth, fearing members of her own family and never trusting anyone but herself.
Threatened, afraid and ashamed, Brenda stays silent, her story a terrible secret she can never tell.
Then she meets Alfred. Barely out of high school, with no one else to turn to for help from the demons that haunt her, Brenda marries him, a man who she thinks will protect her and keep her safe.
Except that her new protector has secrets of his own, and Brenda must now survive new dangers and new assaults. For over two decades, she must fight with everything she has to stay alive and escape the marriage.
In the end, she must decide if she’ll keep her secrets locked up in the quiet or finally give voice to the little girl inside who was silenced long ago.
Hear Me is the harrowing story of one woman’s story of breaking a terrible cycle of abuse and finding her true voice.