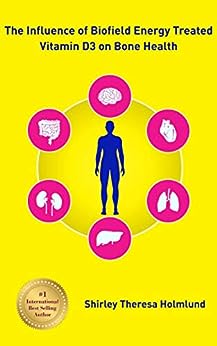 “The quality of life after rapid bone loss among individuals is one of the key health issues today, which might be due to hormonal factors and lack of proper nutrition that lead to an increased risk of fractures. The experimental data suggested a significant potential of Consciousness Energy Healing based vitamin D3 and DMEM medium on various bone health parameters. Vitamin D3 and DMEM medium as test items (TI), which were divided into two parts. Each sample received the Consciousness Energy Healing Treatment by Shirley Theresa Holmlund and those samples were labeled as the Biofield Energy Treated (BT) samples, while the other parts of each sample were denoted as the untreated test items (UT). Bone health biomarkers such as alkaline phosphatase enzyme (ALP) activity, collagen levels and bone mineralization were measured. The cell viability (˃92%) using MTT assay showed that the test items were found to be safe. ALP level was significantly increased by 137.8%, 126.2%, and 102.5% in the UT-DMEM+BT-TI, BT-DMEM+UT-TI, and BT-DMEM+BT-TI groups, respectively at 100µg/mL. Collagen content was significantly increased by 141.5% and 307.3% in the UT-DMEM+BT-TI and BT-DMEM+BT-TI group[…]”