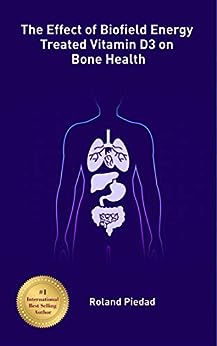 “The aim of the present experiment is to define the potential of Consciousness Energy Healing based vitamin D3 and DMEM medium on various bone health parameters such as alkaline phosphatase enzyme (ALP) activity, collagen level, and bone mineralization. Both the test items (TI) i.e. vitamin D3 and DMEM medium were divided into two parts. The test samples were received Consciousness Energy Healing Treatment by Rolando Baptista Piedad and those samples were labeled as the Biofield Energy Treated (BT) samples, while the other parts of each sample were denoted as the untreated test items (UT). Cell viability of test samples using MTT assay showed that cell viability was more than 87% with safe and nontoxic profile on MG-63 cell line. ALP level was significantly increased by 196.1% (at 10 µg/mL) and 131.6% (at 0.1 µg/mL) in the UT-DMEM+BT-TI and BT-DMEM+UT-TI groups, respectively. In addition, ALP level was significantly increased by 342.1%, 205.2%, and 289.5% at 0.1, 1, and 10 µg/mL, respectively in the BT-DMEM+BT-TI groups as compared with the untreated test item and DMEM group. The percentage of collagen level was significantly increased by 109.5%, 67.0%, and[…]”

Excerpt From: Roland Piedad. “The Effect of Biofield Energy Treated Vitamin D3 on Bone Health.” Apple Books.
Got A Question