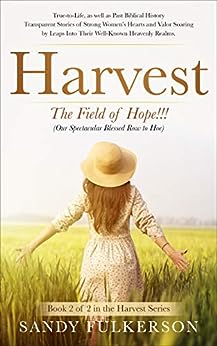 Harvest: The Field of Hope

This is book 2 in our Harvest Series. We invite you to check out book 1 as well. Sandy Fulkerson was brought up in the valley of southern Texas. In Corpus Christi, Texas, Sandy attended college, married a native of Corpus Christi, and gave birth to two of her three children. After her husband volunteered and spent four years in the US Marine Corps which included over a year of fighting in Viet Nam during that war’s commitment, they moved to Houston, Texas. Immediately thereafter a military induced PTSD disability became their close and personal partner, and continued throughout the decades of their married life. Only the power of God held their difficult marriage together and then brought about the strength to withstand the war-time and Agent Orange military illnesses her husband has since experienced. As a couple, they shared their acquired knowledge with many groups and college classes within the metropolitan city of Houston, and on a personal level hosted northern and southern military coed support groups. These groups also included speaking twice a month at the Army’s Fort Hood chapels located on post in Killeen, Texas. It was while there when they were asked to host an informative television program on KPLE TV whose purpose was solely to reach the military personnel stationed there. Sandy also wrote their auto-biography entitled “Bread Crumbs on Purpose” in which she has shared the Fulkersons’ many personal adventures, both positives, and negatives. Through it all Sandy met many magnificent and meaningful women with whom she made long-lasting relationships. Within this current book you will find their heartfelt stories and many of these will build your own spirit with courage and strength. They are all bold heroic souls full of gallantry and honor, especially coupled with many courageous well-known biblical women and their well-published lives; yes, this is a one-of-a-kind book worth reading. It will not only warm your soul and speak to your divine future, but their personal stories will also greatly build your own hope and fearlessness. Yes, it is official; God is so fantastic... All The Time!
Got A Question