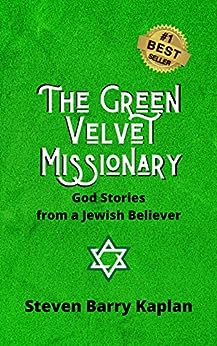 The Green Velvet Missionary: God Stories From a Jewish Believer

How do you share the Gospel with Jewish people? Steven Barry Kaplan (The Green Velvet Missionary), a Jewish believer in Jesus (aka Yeshua), has been reaching out to Jewish people for over 20 years. He’s been to dozens of countries and has used numerous methods and techniques to share the Good News of Jesus Christ with many Jewish people. Steven has led hundreds of Jewish people to their Jewish Messiah. The Green Velvet Missionary: God Stories from a Jewish Believer is an updated version of Schlepping for Jesus and God Stories from the Jewish Mission Field (which have been discontinued). The Green Velvet Missionary shares witnessing methods and techniques and inspiring God stories and scriptures. Discover the following tools within this book: What does green velvet have to do with Jewish evangelism and outreach? God used The Sound of Music, Gone with the Wind, a Green Velvet Couch, and The Coca-Cola Company to teach Steven about Jesus. You will just have to read the book to find out how Steven became The Green Velvet Missionary! Are you afraid to share Jesus with Jewish people? Are you afraid of being rejected, harassed or even physically assaulted? Get over it! What they might do to you pales in comparison to what they did to Jesus! The joy you will experience in leading a Jewish person to Jesus will far outweigh any abuses you might have to endure. Steven witnessed to a Jewish man in Costco, and the man yelled at him. Steven smiled, stuck out his hand to introduce himself and now the two of them often eat lunch together when they see each other at Costco. What do you mean you don’t know how to witness to Jewish people? Steven was trained by an anti-missionary who challenged him to buy books and look up answers. They traded e-mails until the anti-missionary couldn’t answer Steven’s questions! What do you mean you don’t know any Jewish people? Steven was staying with a friend in Tacoma, Washington who said he didn’t know any Jewish people. Steven challenged his friend to pray, and the very next day a bunch of Israelis rang the doorbell while selling oil paintings! The Green Velvet Missionary: God Stories from a Jewish Believer brings you over 25 years of incredible God stories. Steven was in his kitchen struggling with a broken can opener, and praying for a new can opener and then there was a knock on the door… God told Steven to work at The Coca-Cola Company, and after reading this book, there is no doubt God spoke to Steven personally! God told Steven to witness to Jewish people in Cork, Ireland. Although, there are only seven members in the Cork Synagogue, Steven spent two weeks in Ireland witnessing to Jewish people! On another occasion, as Steven was being thrown out of a synagogue in St. Louis, Missouri, the Holy Spirit told Steven to pray for the family of the man throwing him out. Months later, Steven was on the other side of the world and witnessed to a young man who just happened to be the son of the man who threw Steven out of that synagogue!
Got A Question