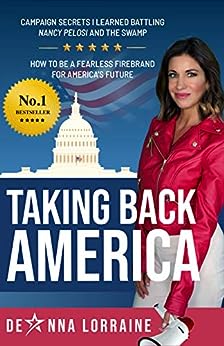 Taking Back America: Campaign Secrets I Learned Battling Nancy Pelosi and The Swamp, How to be a Fearless Firebrand for America's Future

#1 International Bestseller in TWENTY-ONE categories in FOUR Countries. USA: International & World Politics, Military Policy, International Relations, Sociology of Marriage & Family, Legislative Branch, Gerontology, Women Writers, Arms Control, Radical Thought, and Sociology. CANADA: Diplomacy, International Relations, International Relations in Politics, Government, Arms Control, Abortion & Birth Control Social Sciences eBooks, Pragmatism, Gerontology, and Good & Evil Philosophy eBooks. UNITED KINGDOM: Mass Media. GERMANY: Politics & Government. Have you ever wanted to know what it’s like to run for Congress? How about challenging the most powerful member of Congress, the speaker of the house? Catch a glimpse behind the scenes of Republican DeAnna Lorraine’s “David & Goliath Battle’' campaign against one of America’s most high profile politicians, Speaker of the House Nancy Pelosi. Lorraine shares the good, the bad, and the ugly , with the hopes that others can learn from her triumphs, as well as her challenges, most of which can be applied outside of the political world to turn any endeavor from mundane to badass. Taking Back America: Campaign Secrets I Learned Battling Nancy Pelosi and The Swamp will share: An eye-opening glimpse into the realities of campaigning for public office Dirty secrets exposed from the Establishment Lorraine’s surprise fight with both the left AND the RINO Establishment on the right Creative outside the box thinking useful for any organization Tips and tools used by politicians that they wish you didn’t know Learn how to be a true American patriot in today’s uncertain environment If you want an exclusive, uncensored, behind-the-scenes view into the good, the bad, and the very dirty of what goes on in a high-visibility political campaign, this book will spill the tea . Although Lorraine did not win the primary, she ran a brilliant, unique, unconventional campaign that bucked the Establishment, as well as won over hearts and minds across America and beyond. DeAnna Lorraine is a rare Fearless Firebrand for America’s future who is dedicating her life’s work to making a better, more patriotic America.
Got A Question