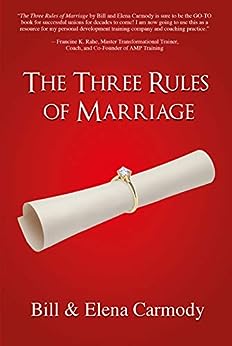 The Three Rules of Marriage

Nearly 50% of all marriages in the United States will end in divorce. Researchers estimate that 41% of all first marriages end in divorce. So what do the other half do? How can you ensure that you create the kind of marriage that will support you now and well into the future? Creating a successful marriage isn’t about being lucky or obsessing over finding the perfect partner. A successful marriage lasts the test of time and is about knowing the rules that set you and your partner up for the long-term.

When you both understand the optimal way to resolve conflicts, avoid holding onto the past and effectively communicate your love and your appreciation for each other, you create a foundation from which to build a powerful union. "The Three Rules of Marriage" delivers a wealth of insight provided by married couples who have faced some of the most difficult challenges a marriage can face and became stronger because of these difficulties.

Set yourself up for a successful union and use these rules to create marital bliss. In this time of seismic change, practicing these simple yet powerful rules on a daily basis will ensure your marriage is one that supports you and adds to your overall happiness now and for decades to come.
Got A Question