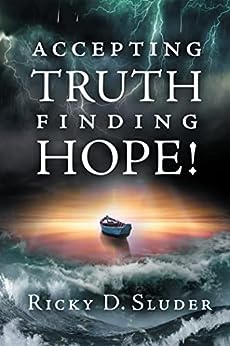 There are four needs that only God can meet in each of us. They are Acceptance, Identity, Security, and Purpose. Yet, we all strive to fulfill them on our own! In Accepting Truth, Finding Hope! Ricky D. Sluder invites you to join him in a deeply personal conversation where he shares lifelong struggles with answering these four questions for himself: Why are you striving for acceptance? Who are you? Why are you so insecure? What is your purpose for living? Ricky holds himself accountable along the way, admitting his mistakes and his intentional sins instead of providing excuses. In each chapter, he does a wonderful job of having a discussion with the reader instead of simply preaching to them. The use of rhetorical questions, hypotheticals, metaphors, and an overall reflection-based approach works phenomenally to engage the reader in conversation like no other book. Ricky’s use of scripture to provide living examples from biblical history, followed by his raw analysis and real-world applications of the message, will aid readers in understanding God’s true character and nature as it relates to these four needs. His transparency throughout the book is admirable, empowering readers to reflect on their own past, present, and future selves. Ricky serves as an inspiration for readers willing to take the step toward accepting Truth and finding Hope , just as he did. If this book has found its way to you, consider it a personal invitation to join Ricky in this riveting conversation.
Got A Question